Ah, the holiday season… So much to do, so many posts to finish (stylist selection announcement, caring for makeup brushes, beauty bloggers dictionary), but so far behind.  I’ve so got to get my tree up!  So, I thought I’d pull out this post I wrote a while ago in preparation for my closet de-cluttering series which does have a festive angle.  Enjoy!

In the Spring of my freshman year at the University of Texas, while I was busy studying for finals in Austin, my mother (Jackie) and grandmother (Sara Lee) were shopping in Houston and spotted a formal dress on a store manikin.  Sara Lee immediately pronounced it to be a “good lookin dress” – the ultimate accolade coming from my grandmother.  She made up her mind that the dress belonged in my closet so it was promptly placed on hold and I was ordered to come into town and try it on as soon as finals were over.  Spoiler Alert: I still own this dress.

I didn’t actually have a pending event for the dress – Sara Lee just wanted me to have it and since I was in a sorority that held formal dances annually, we were pretty sure I would have an opportunity to wear it.  And as if to test our resolve, the day after Sara Lee purchased the dress, my mother got a call from the store clerk informing her that another young lady wanted to rent it for an upcoming pageant.  It was there after deemed, “the pageant dress.”

The pageant dress is probably one of the most flattering dresses I’ve ever owned. The fabric is a very comfortable and forgiving silk jersey and the angular shape coupled with drapes in just the right places hides a multitude of sins.  It looked great when I was a size 6 (in today’s terms that would probably be a size 2 or 4) and it still managed to work when I was closer to a size 12 – now that is an impressive design.

The pageant dress carried me through at least 2 formals in college, my first office Christmas party, my first charity gala and a formal new years eve party.  I’m sure there were additional events back in the late 80s and 90s that I’m forgetting.  In those days, there was no internet to project pictures for all your social circles to see so recycling dresses for multiple events was totally acceptable.

With my friends Doug and John New Years Eve 1989

Before my first charity gala 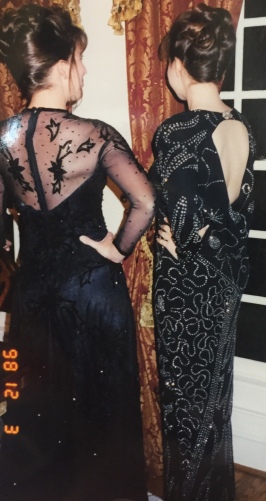 With my friend Cindy showing off the low back lines

But I think the real magic of the pageant dress was how much fun we had occasionally pulling it out to try it on for no occasion at all.  Jackie, my sister-in-law (Lena), my good friend Karen and several other roommates and friends have all walked a makeshift cat walk in that dress at one point or another.  There was something about the pageant dress that just made us feel glamorous.

Of course with the large shoulder pads and partial sequins, the pageant dress is completely out of fashion today.  I’ll never forget the sad feeling I had the first time one of my young cousins commented on how out of style my dress had become.  Although, I did wear it as recently as 2012 for a 1980s themed gala at my son’s school.

I know I’m on a quest to de-clutter my closet, but this dress isn’t going anywhere.  There are too many memories of good times with friends and family and most especially Sara Lee’s pride and generosity.   Now I just have to figure out what to do with it.  Pack it up and store it for future generations?  Display it in my closet inside an extra large shadow box?  Leave it hanging on my rack to try on with my young cousins some day when we are feeling nostalgic or another 80s themed event pops up?  I suppose there is a chance it may actually come back in style?  Any ideas?

2 thoughts on “The Pageant Dress”