Shingles suck.  There are certain conditions and situations where that word just works and shingles is definitely one of them.  I still blame shingles for my grandmother Sara Lee’s death – 3 years of nerve pain has got to wear on you because G-d knows 2 weeks of it has sure worn on me. Several people have reached out to me in the last couple of days to empathize and tell me about their shingles stories.  The commentary has left me with a lot of questions so I thought I’d share some research with you. 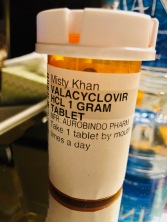 The most important thing I learned that I want to make sure I pass along to you is that if you even suspect you might have shingles, don’t mess around!  Get to your primary care physician or dermatologist right away so she can get you on the anti-viral medication as soon as possible.  Getting this medication early can speed up healing and reduce the risk of complications (per the Mayo Clinic website).  In my grandmother’s case, she got this medicine late and went on to suffer for years with nerve pain and itching.

The rash or blisters are the easiest way to spot shingles, but they may not be the first symptoms.  In my case I had painful headaches

both in the form of dull to acute pain above my temple and right eye area (although occasionally on my left side as well) and severe pain that comes in short bursts either on the right side of my face or behind my eye.  Based on several other accounts I’ve read about, the headache is a pretty common initial symptom.

I was convinced I was suffering from a sinus infection – shingles were the last thing on my mind.  I noticed one blister about where my sunglasses hit my nose so I didn’t think much of it, but my client noticed several others in spots that I wouldn’t necessarily see looking at myself head on in the mirror.  That’s when I sent a picture to my doctor and shingles were quickly diagnosed.

The most common thing I hear from people is – “Shingles are super painful!”  But then on a couple of occasions I’ve heard the pain can vary – its not as bad for some people.  One of my doctors did tell me that the severeness of pain can vary and that it is also an

indicator of how long the condition will last – he then looked at me and said judging by your level of pain, I’d say it’s pretty severe, but you never know.  Great!  The nerve pain apparently can last anywhere from a couple of weeks to a couple of months to in severe cases a year or more.  Double Great!

What Causes the Pain

I had a misconception that the pain of shingles comes from the nasty rashes they show you in shingles vaccine ads.  The truth is, for my rash at least, the rash isn’t that painful.  The lesions burn like a mild sunburn and itch slightly.  I know my grandmother itched miserably although her blisters were on her torso where as mine are on my face.  The real pain for me comes from the nerves under my skin in the form of the aforementioned headaches.  Sometimes they make me visually flinch.  All of that has slowed down or dulled since I started the medication though. I’m not grossing you out with pictures of my shingles, but these are my new Cole Haan glasses that I have to wear exclusively for 4 weeks

My other super annoying symptoms are related to my right eye which include light sensitivity, difficulty looking at a computer screen for more than a few minutes, and nasty swelling.  Makes my day job not to mention keeping up with this blog a bit difficult.

Can You Get It Again

I was under the impression that once you get shingles, you won’t get them again.  All the medical sites say while it is rare, you can get shingles more than once.  Several people have mentioned to me that they have had it more than once – one of my neighbors mentioned having severe cases three times – yikes!

Ugh – I so don’t want to enter this battle.  I know I suggested strongly considering the vaccine in my video on the Closet Reboot YouTube Channel, but vaccines are so controversial that I’m not sure that was the best suggestion.  I personally am big on childhood vaccinations because of a friend of a friend in collage who had polio even though his parents had ready access to the polio vaccine, but chose not to use it.  When the pediatricians asked me if I wanted the boys vaccinated, I said not just “yes”, but “oh hell yes”.

On the other hand, I don’t think I’ve ever had the flu shot.  I’m not convinced it works and I have this stubborn feeling that sometimes you need to get sick to really build up your immune system.  I’m not a health professional so what do I know?  I’m also very aware of the strong lobby against childhood vaccines not to mention adult ones.  Again, I’m not an expert, but here is what I found doing research:

One tidbit I picked up in the comments on Dr. Northrup’s site was that many people believe shingles is more common among older people who have had the Chicken Pox now because we are no longer getting re-exposed from children and grandchildren which in the past acted like a booster to our immune system.

Cause and Final Thoughts

Basically having the chicken pox virus in your system means you could get the shingles.  But what actually brings it out is unknown.  The most common speculation is that auto immune disorders or weakened states like cancer, etc. or wait for it… stress.  Where have I heard that before?  The second thing everyone says to me after the painful comment is “you know shingles are brought on by stress.”  This comment touches a nerve.

We’re all supposed to lead this lovely stress free life getting plenty of sleep, eating super healthy, and continually singing Kumbaya with our children, spouses, other family, friends and co-workers.  Good luck with that.  I mean, of course we should strive for those things, but is it realistic to believe that we can live a stress free life?  If I think about it, probably the most stress in my life is self-generated. But, that’s the subject for another post.  In the meantime, please take care of yourself and have a great rest of the weekend!